Introduction
Without water, life is impossible. Even single cell organisms need water in order to function. Water is a universal solvent, the most common molecule in the body and commonly known as the most important nutrient. “In the horse, water is essential for fluid balance, digestive function and gastrointestinal health” (NRC, 2009). It also helps to maintain proper moisture level in feces, maintains normal blood volume and aids in the normal function of sweat glands as stated by Dr. Marteniuk of Michigan State University’s ‘Information for Animal Owners’. Horses can tolerate water restriction for extended periods of time, however, a complete lack of water is rapidly fatal (NRC, 2009). Since water plays a major role inside every cell of the body, the interstitial fluid*, circulation, digestive function, gaseous exchange*, cutaneous evaporation*, sweating, electrolyte balance, renal function, fecal formation and milk secretion, some basic knowledge about fluid balance and its more complicated control mechanism are required in order to make proper nutritional choices for the horse as there is no voluntary intake of drinking water without a thirst stimulus.                (* Scroll down for Appendix – A -  glossary.)

Fluid Balance
Fluid balance or water balance in the horse is achieved by equalizing water losses with water intake. (NRC, 2009). Fluids are lost through feces, urine, respiration, the skin and milk secretion (lactating mares). In order for a horse to voluntarily replace the fluid losses by drinking water and maintain homeostasis*, it requires a thirst stimulus. Direct voluntary water intake through moisture content in forage or feeds does not require a thirst stimulus. Large amounts of water are reabsorbed in the intestinal tract. 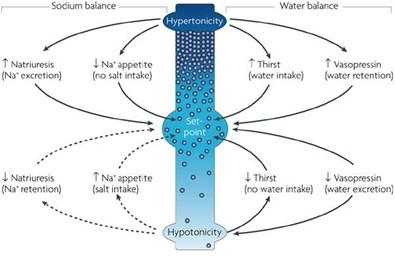 Fluid Homeostatis
The Hypothalamic-Pituitary (HP) Axis* works as a negative feedback system responsible for i.a. osmolality changes* in extracellular fluid* based on Na+ concentrations. If Na+ concentrations are too high, or too low a homeostatic response will lead to changes in intake or excretion of water and sodium proportional to the hypertonic* or hypotonic* conditions triggering the response as shown in the diagram below. Note that the dashed lines illustrate potential homeostatic responses for which experimental data was not present at that time. (Bourque, 2008).

Water Requirements
Total body water (TBW) of a horse is an average of 62 - 68% (NRC, 2009) of which 21 – 25% is extra-cellular. TBW reduces linearly with age (NRC, 2009). Average maintenance water intakes are about 5L/100kg BW/d and the estimated maintenance requirements for a 500 kg horse that is fed 1.5% hay and kept at thermal neutral temperatures (5 - 20º C) ranges from 21 – 29 L/day (NRC, 2009). Water needs for light activity do not differ much from maintenance requirements, according to NRC (2009), but it is difficult to predict water needs for exercising horses as it depends on environmental condition, exercise intensity, duration, the fitness of the horse and acclimatization to its environment (NRC, 2009). Horses working in milder weather conditions or horses turned out in hot weather can lose approximately 4 L of sweat per hour and a horse sweating heavily can lose up to 16 L per hour (Kellon, 2012).

Disturbances in Fluid Balance / Dehydration in Horses
The definition of dehydration is very vague: “when the loss of body fluids, mostly water, exceeds the amount that is taken in” (WebMD); “Dehydration is the loss of water and salts essential for normal body function” (TheFreeDictionary); “an abnormal depletion of body fluids” (MerriamWebster); “Excessive loss of body water” (MedicineNet). Mild disturbances (< 5% of body weight in water loss) are not easy to detect. Dehydration can further be categorized as a disturbance in volume (isotonic dehydration) or in concentration (hypertonic or hypotonic dehydration). In “Horse Owner’s Veterinary Handbook” Gore et al. (2008) state that dehydration is not recognized until  >= 5% of body weight in water loss occurs and that a water loss of 12 – 15% of body weight is life threatening. Sneddon (1992) reviewed the adaptive successes of Arab-based horses in arid climates and concluded that Arab-based horses have the ability to protect plasma volume during dehydration by maintaining plasma protein levels, especially albumin. It was also concluded that Arab-based horses’ red cells are able to resist haemolysis* during a 72 hr. (12%) dehydration/immediate rehydration regime and thus these horses are resilient to a 12% hypertonic dehydration and can be classified as semi-arid rather than wet-temperate ecotypes, according to Sneddon’s findings. Exercise places a great strain on the cardiovascular system as increased blood flow is needed to transport oxygen and nutrients to the muscles and remove metabolic waste. At the same time heat is building which requires increased blood flow to the skin to cool the horse by dissipating heat through sweat. The water loss from sweat reduces the viscosity of the blood and the volume of extracellular fluid which puts even more strain on the cardiovascular system.

Although there are medical causes for dehydration (for example: prolonged diarrhea, fever, infections, renal dysfunction, endocrine dysfunction, use of certain medications like Furosemin etc.) these are outside the scope of this paper which puts the emphasis on dietary causes or dietary treatment options (mainly water and sodium).

Causes of Dehydration in Horses

Clinical Signs of Dehydration in Horses
Mild dehydration (less than 5%) is hard to detect. The easiest test a horse owner can perform to detect dehydration is the ‘skin-turgor test’ (NRC, 2009) or ‘hydration-pinch test’ (MacInnes and Davis, 2011) is performed at the point of the shoulder on an adequately hydrated horse, the skin returns to normal in less than a second (MacInnes and Davis, 2011). In a dehydrated horse, the skin, when pinched, will not immediately snap back, but will ‘tent’, so in some literature this is also called the ‘skin-tent test’. In the capillary-refill test performed on an adequately hydrated horse, after pressing on the gums above the corner incisor, the colour will return to normal within 2 seconds (MacInnes and Davis, 2011). Urine will be concentrated and darker in colour, but even with total water deprivation will not be less than 0.5 L/100 kg BW per day unless the horse suffers from renal failure (NRC, 2009). The horse is able to absorb substantial amounts of water and electrolytes from the large colon during prolonged exercise and by doing so will get a “tucked up” appearance to the abdomen (Schott, 2011). Thumps is a serious sign of isotonic dehydration and exhaustion, although the condition itself is not. It’s comparable with the hiccups in humans (the horse’s flank twitches and makes an audible “thump”), but when it occurs veterinary care is required (MacInnes and Davis, 2011). Thumps is caused when too much chloride is lost through sweat. Chloride and bicarbonate are the only anions (negatively charged ions), so in order to maintain electro-neutrality when Na+ is reabsorbed under influence of aldosterone (secreted during moderate exercise - Muñoz et al., 2010) and CLˉ is depleted, HCO3ˉ is no longer excreted by the kidneys and too much bicarbonate causes alkalosis* which in turn can cause colic or thumps. Tie up is an even more serious form of isotonic dehydration. The muscles cramp up and the horse becomes reluctant to move and might seize up completely (MacInnes and Davis, 2011).

Prevention and Management of Dehydration in Horses
As the system for fluid homeostasis is based on a negative feedback system, some imbalance has to occur before action is taken to restore the balance. According to Coenen (2005) a positive water balance is achieved after feeding and watering, and water retention increases postprandially* for 4-5 hours, but the rate of fluid loss through sweat during a 2-hour exercise period results in a negative water balance. A basic ration that depresses the acidic effect of metabolism, lowers heat production itself, and lowers cortisol liberation would be desirable as cortisol readily increases during moderate exercise. As the weakening capacity to eliminate the heat which is produced by strenuous exercise is a performance-limiting factor, Coenen (2005)hypothesized that fat as energy source would reduce heat of metabolism, but fermentable fiber is still required in order to prevent a collapse of the microbial system in the hindgut. Fiber sources like the highly fermentable pectin in beet pulp has the added benefit of increased water consumption (Coenen, 2005). Ideal would be to replace water and ions at the same rate as they are lost in sweat, but during exercise gastrointestinal function is compromised by many factors that have priority over gastric emptying and intestinal absorption, which makes it difficult to actually absorb the water and electrolytes offered (Ecker, 1995; Frape, 2010). Care has to be taken with offering high concentrations of electrolytes to avoid hypernatremia (Schott et al., 1999; Hess et al., 2007). Hess et al. (2007) hypothesized that potassium supplementation affects plasma K+ and may lead to neuromuscular hyperexcitability. They also hypothesized that diets high in calcium (1.5% instead of 1%) would lead to higher plasma Ca++ and the results of the study during an 80 km endurance race confirmed this, however, the test group that was supplemented with potassium during the race was also supplemented with 1.5% calcium and thus the neuromuscular hyperexcitability due to high K+ and low Ca++ did not occur, but Hess et al. (2007) concluded that higher plasma Ca++ and lower K+ during exercise could help reduce the risk.

Conclusion
Water is the most important nutrient, but without balanced electrolytes (and a properly working endocrine system) it is impossible for the horse to maintain fluid homeostasis. Whether regarding an idle horse or sport horse, maintaining fluid balance is important to sustain all bodily functions. Horses evolved to withstand cold better than heat and in natural settings usually rest during the hottest part of the day. In natural settings horses only spend 1% of the time galloping or trotting (Lee, 2011) which is only 15 minutes out of the day. It is therefore not difficult to understand why heat gain is a major limiting factor to exercise and why thermo-regulation in horses did not evolve to be a very efficient cooling system for endurance exercise and/or hot and humid conditions, but often results in moderate to severe dehydration.

3.      Salt is very important in maintaining water balance.
Salt blocks alone are often not sufficient for exercising horses, provide loose salt or mix it with the feed.

4.      Cold water temperature reduces intake, while in the winter water requirement might be higher due to increased hay intake to
maintain body temperature (Marteniuk)

6.      Sweating is controlled by thermo-regulation, independent of hydration status or electrolyte homeostasis (NRC, 2009).

9.      Drink volume after exercise is higher from buckets than it is from automatic waterers (Nyman and Dahlborn, 2001)

Muñoz, A., Riber, C., Trigo, P., Casteljón, F.M., 2010. Clinical Applications of the Renin-Angiotensin-Aldosterone-Vasopressin Axis in the Horse and Future Direction for Research. Journal of Equine Veterinary Science, Vol 30, No 11 (2010)