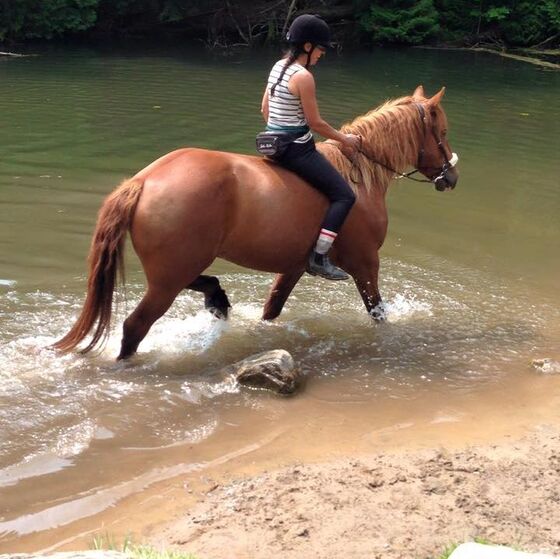 I don’t know where to begin on singing Mila’s praises.  She came into my life through a friend.  I had been having some serious and escalating struggles with a 4.5 year old Belgian Quarter Horse cross that I had rescued from the meat truck (formerly owned and abused by Mennonites).  All was well for the first 7 months that I owned Brodie, he was green (as was I) but we rode regularly on hacks and things were very good.  Then the ice storm/winter of December 2013 hit and Brodie ended up spending much of his day and night indoors.  When his behavior became spooky, and unsure I was not skilled enough to provide him with the reassurance and guidance he desperately needed.  We quickly became very bad for each other.  My coach at the time was getting nowhere with him and she herself became intimidated by his behavior.  The manager at the farm where I boarded him was threatening his life and telling me to get rid of him or else.

Enter Mila…. She had met Brodie a few times briefly and agreed to bring him to her property to live.  Initially, Mila worked on building trust with Brodie and letting him know that not all humans were bad.  The bond between them was evident from day 1.  With Mila he flourished but I had still not gained enough skill to feel safe riding him on my own so I made the harsh decision to trade him in and purchase a well-rounded, level-headed older mare.

Brodie was moved to a new farm after 1 month with Mila and immediately went downhill.  The owner there was warning everyone to stay away from him as he was “extremely dangerous”.  She never did attempt to ride him.  After 6 nights of crying non-stop, and Brodie losing a ton of weight, I purchased him back and kept the mare as well.  I moved Brodie to a quiet, peaceful barn closer to me.  Mila agreed to visit regularly and continue the task of restoring his heart once again.  I can’t tell you the excitement that he let out upon seeing Mila for the first time after being separated for about a month.  What she had created with him was undeniable.

8 months have passed and Brodie has been ridden by several experienced riders without incident.  Mila even rides him bareback and bitless on trails with deer and wild turkeys abound without a misstep.  He has truly been given a second chance at life because of Mila’s never-ending patience and dedication to her connection with his heart and soul.  If you are looking for a trainer full of gimmicks and tricks, keep looking.  If you want your horse “sorted out” within 10 days, keep looking.  Mila works with the horses she comes across on their schedule and with their best interest in mind.  She connects to their souls and minds through mutual respect not domination and fear tactics.  She asks the horse to follow her lead and rewards his willingness to do so without punishing his refusal.  She is always sure to rule out equipment/health issues prior to assuming your horses’ missteps are “attitude related”.  Mila recognizes that having a willing horse is far more valuable and rewarding than having an fear-instilled obedient horse.  This is not to say that Mila is a pushover, she does demand respect and creates very clear boundaries that a horse can understand. But in order to receive respect, one must give it and most trainers haven’t mastered that skill just yet.  I would not trust Brodie in the hands of another trainer.

Just as Mila has shown Brodie patience and kindness, so too has she done the same for me.  Never one to accuse, Mila has pointed out when I need to exercise patience and understanding rather than become frustrated and grumpy.  She has reminded me that just because a ride may not have gone according to plan, doesn’t mean it has to be considered a failure. I am a better horse owner because Mila is in our lives and I have definitely received so much more from the experience of owning a horse since I decided to “go with the flow” and not have a script of how things should be when I arrive at the barn.   And yes Mila, you are so right, a willing horse is a million times better than an obedient horse.

*People may contact me via cell phone or email should they have any questions or concerns.

Sheila
Sheila Grandy
Toronto, ON
May 2015
"The herd and I have been working with Mila since  September 2013. Her knowledge and passion for horses has allowed us to expand our connection through knowing what is best for the horses and providing it for them. Her horse centered approach helps the horses be comfortable with her and know that she has their best interests at heart. Given our farm's approach of the horses as guides and teachers, Mila has been flexible and widened her perspective in order to accommodate us as clients. She has been reliable and supportive as we adjust to caring for horses on our farm. She has so many years of experience and such a vast knowledge of horse care and behaviour that we trust what she says when it comes to caring for the herd. Thank you Mila for all that you do! You are an asset to the horse industry!"

The Walton Family (two and four legged)
Beeton, ON
March 2015
When my Haflinger mare Savannah was first moved from the boarding facility to our new home she was the only horse. Since we didn’t want her to be lonely we purchased a Shetland pony mare (Kelly) as a companion, thinking the two of them would become best buddies. Unfortunately this was not the case and Kelly was often found hiding from Savannah in her stall that has free access to the paddock. We kept the top door closed to prevent Savannah from entering Kelly’s stall, but Kelly was spending most of her days inside. After contacting LoFoSo, Mila suggested to hang two slow feeder hay nets in our small paddock, as far from each other as possible and making sure they always have hay in them. Since then my horses are getting along a lot better and are mostly busy eating outside and are even switching hay nets regularly without any problems.

(Translated from Dutch by LoFoSo™)

​Comments from University of Guelph
​

Major Assignment for the course: Advanced Equine Behaviour - University of Guelph
"(Re)Training & Behaviour Modification for Horses with a History of Chronic Sress" 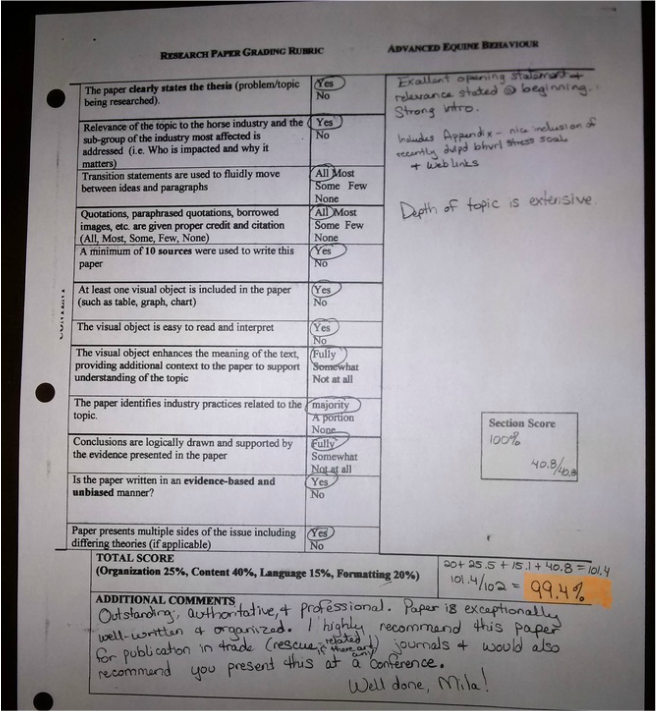 My grades for the course Equine Behaviour - University of Guelph

Including the paper: "Guidelines for Equine Socialization" 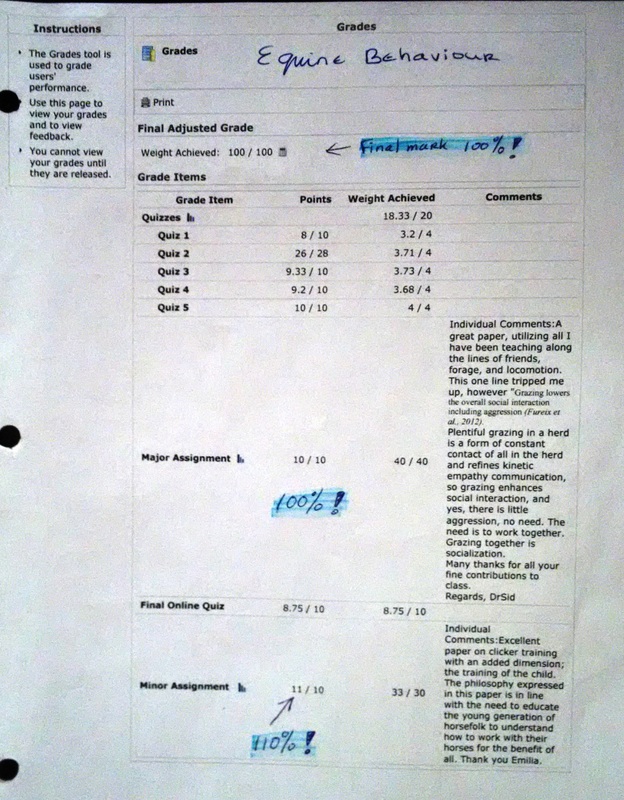