The Horse and Locomotion, Forage & Socialization - Ethological Needs of the Horse

The Horse and Locomotion 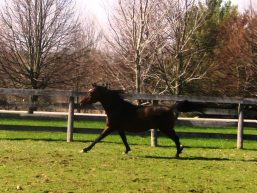 Horse Behavior: A Horse in Free Movement.
Free movement and exercise are not considered the same. Free movement in a social setting develops a horse's executive skills (yes, horses do have cognitive function, although at a much lower level than humans of course and most humans make sure that these cognitive functions do not develop in their horse), when it is required to make instant decisions on its own account. It is the difference of driving a car on a deserted country road or in city traffic, the latter requiring a much higher skill set. Moving at high speeds in close proximity to conspecifics, taking in consideration their own rank and that of others, to lead or to follow, differentiate between play and agonistic interaction, the terrain they travel on, anticipating movement of group members to prevent colliding into each other are all skills that can not be taught by humans, but practise social skills, help in brain development, learning ability and overall wellbeing.
Read More ....

The Horse and Forage 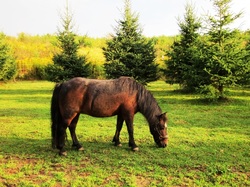 Horse Behavior: Innate Foraging Behaviour
As grazers of the plains horses evolved to eat an average of 14 -18 hrs per day while constantly scanning their surroundings and taking one step for every few bites of forage. The modern horse is often limited in its forage intake and instead fed concentrates at longer intervals and higher volume than their small stomach can handle, which could result in gastric ulcers and other digestive upset (which may trigger specific undesired behaviour). The innate foraging behaviours however remain present and depriving a horse of the opportunity to exhibit these behaviours will result in development of abnormal behaviours such as oral stereotypies, aggression due to frustration or horses may become apathetic.
Read More ....

The Horse and Socialization 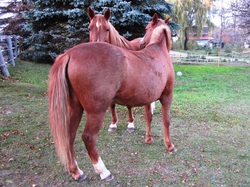 Horse Behavior: Horses Allogrooming
A horse is a social animal that receives its first life lessons from its dam by the establishment of a mare-foal bond. In natural settings a mare that is about to foal will seek solitude. Undisturbed olfactory investigation is a very important part of establishing a mare-foal bond. Interaction between mare and foal teaches the foal the basics of communication which will be strengthened later on when it interacts with peers and adults.
Foals that are imprinted have a weaker mare-foal bond and foals that are not allowed to socialize with peers and adults while growing up may experience socialization problems, creating a vicious circle where the horse will not be allowed to be turned out in a group setting due to aggression or being too naive, thus denying the horse social time with conspecifics that is very important in sustaining a healthy coping mechanism.
Read More ....