This video was made by LoFoSo™ as a guest presentation for the course: Advanced Equine Behaviour - University of Guelph. Three examples of horses affected by chronic stress and their behavior modification with scientific approach and references to literature.

Horse bites when picking up feet

A complaint from the handler about the behaviour of this 18 year old stallion named El Victor struck me as odd as he is usually very gentle, but now bites when trying to pick up his front feet. This sudden change in behaviour always has a reason. Upon examination it was discovered that he had injured his front legs when they got caught between the fence boards. The initial picking up of feet after this injury must have been painful, resulting in the biting as a reaction. Problem is that with picking up feet the usual way, one is unable to see any warning signs (for instance ear pinning or biting threats) and the horse might not see another way to let the handler know that he really doesn't want his legs to be touched right now because they feel very tender/painful. We  could put this horse in the cross ties and spend half an hour to force him to pick up his feet, or we can spend 10 minutes with him and assure him that we are not going to hurt him and that it is going to be OK. 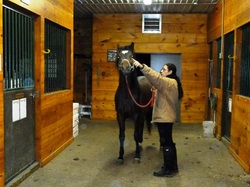 Teaching Jabez not to bite me by making it a positive experience when he doesn't bite and not punishing when he does. Of course I tried to deter him from biting me by waiving the end of the lead rope right in front of me in a non-threatening matter. A horse's nose is extremely sensitive, the end of the rope brushing against his vibrissae (whiskers) when he would get to close to me with his mouth was enough to deter him, no yelling or hitting required. This can be paired with a simple "no", teaching him what the word "no" means at the same time. (Active punishment may stop him from biting, but it doesn't exactly create a bond between horse and human. This horse was taught to bite when he was a foal by not correcting his oral investigative behaviour and allowing him to nibble on clothes and giving him positive attention when he did, thus reinforcing the behaviour. Now as a 4 year old adult stallion, all of a sudden it is not that cute anymore when he pulls on your arm and tries to lift you off the ground, especially not when there is a piece of your skin caught between his teeth, trust me on that one. For him it's just the way he interacts with humans, like he was when he was a baby. You could tell by the position of his ears that he was just messin' around and displaying his power, there was no aggression). As you can see, he is not in the cross ties that would prevent him from biting and there is slack in the lead rope. He has a choice to bite or not to bite, but if he doesn't and faces forward I give him a 'click' with the clicker followed by a treat and "good boy" in a low voice. First time putting on the halter took 30 minutes and included several bites (while he tried to push me out of his stall while the stall door was closed) and 1 arm lift, next time I was there a week later it took only 1 minute. So yes, method works. To further try to reduce the oral investigative behaviour I have installed a slow feeder hay net with 1 1/4" openings, so Jabez has something to nibble on 24/7, greatly reducing his biting habits, although it is going to take some time and patience to completely extinguish this behaviour.

Filly afraid to be haltered.
This filly had an accident with a halter in the past and is now afraid to have a halter put on and especially to be 'grabbed' by the halter once it is on. I'm giving this filly back some control, let her come to me instead of me walking up to her. Her natural curiosity wins. I am not trying to trick her to put the halter on. Instead, she is free to put her nose in the halter to grab a treat and then take her nose out again. We are making it a little game that she seems to like. The halter becomes a positive experience. So positive in fact, that after I turned her loose to go back to the herd, she turned around and came right back, let me put on the halter one more time for one more treat. 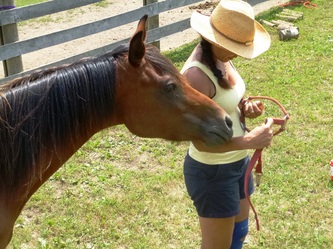 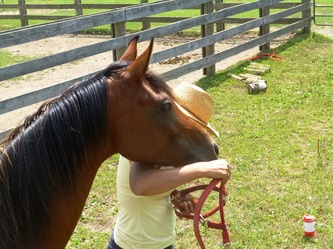 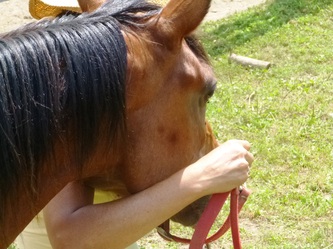 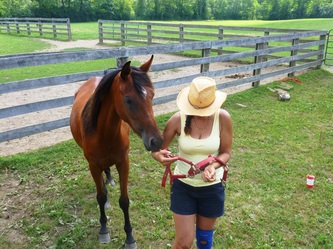 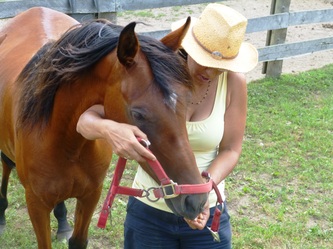 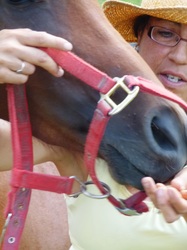 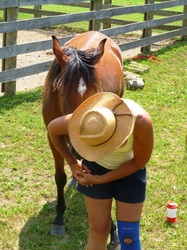 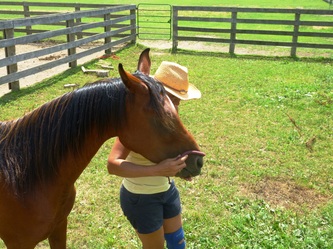 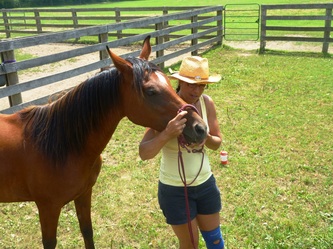 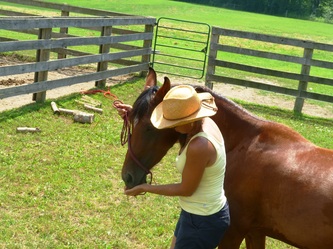 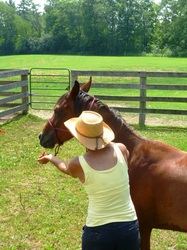 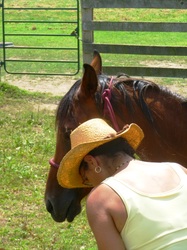 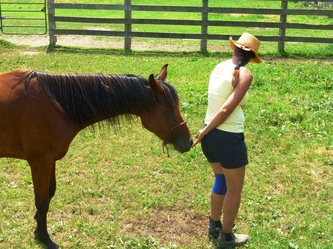 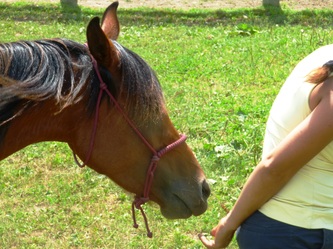 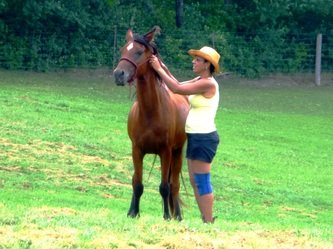 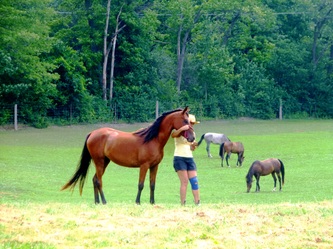 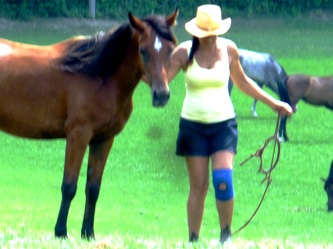 Horses that are Difficult to Catch: 11 y/o Quarter Horse Mare

A HORSE THAT DOESN'T WANT TO BE CAUGHT

A horse that avoids being caught probably associates being caught with something unpleasant (taking it away from the juicy grass, taking it away from pasture mates, putting it back into the stall, riding, vet/farrier, etc.) or with something scary (an accident, punishment, overexertion etc.). In order to break this cycle it helps to associate putting on the halter with something pleasant (or neutral), but first you have to be able to get to the horse without it running away from you. There are different things you can try, depending on how difficult it is to catch the horse. If the horse can be touched, but runs as soon as it sees a halter, you start by walking up to the horse and simply give it a wither scratch (or treat, or both), then walk away. Do this a few times, then do the same with a halter folded in your hand, but without putting it on. Then with a halter dangling in your hand, but without putting it on. Next step is to do the same and show the halter, but not put it on. After that, touch her on her body with the halter, but still don't put it on. Then same, but nose briefly in the halter and walk away again. Eventually put the halter on, but take it off right away. After doing that a few times you put the halter on, leave it on, walk away, come back and take it off again. Then, finally, leave the halter on, walk away and come back a few min. later with a lead rope to lead it around a bit and again, unhook the lead rope and walk away. Eventually you can lead it out and put it right back again.etc. etc. Every step could be repeated a few times, only progress to the next step if the horse is co-operating with the current step. If things go well, you may choose to skip a step, if things don't go as planned you might have to take a step back. The horse will need breaks in between and this should be spread over several days.

If the horse already runs away when it sees a human approaching, you may have to get a little more creative in motivating the horse to come and investigate you. Some horses do so if you give a lot of attention to other horses (especially if you give them treats), other horses only come to investigate when you are not paying attention to them and don't look right at them and with some horses you have to stand or sit in the pasture for awhile without moving before they come and check you out. With one horse I worked with I had to pull little bits of hay out of a round bale to simulate I was 'eating' and not paying attention and after awhile she came and stood right beside me and we were both nibbling on the hay for a little while. Another horse I had to approach slowly walking backwards, then stop and stand still until she approached me and finally dared to take a carrot out of the hand that I had on my back. The first horse didn't want to be caught because she suffered from back pain due to probably an ill fitting saddle while she was at a trainer. The second example was a horse that had been abused and just didn't trust people. A stallion I worked with would rear and strike dangerously, so I did approach him at an angle and had to watch what he was doing from the corner of my eye, then I would just 'mind my own business' walking around in the paddock for awhile and making him wonder what the heck I was doing. Eventually he approached to investigate me and received a tiny piece of apple for the fact that he didn't try to kill me. After those initial contacts I built it up with the steps I just described, for all three examples.


In the case with the horse above, that had been a brood mare in Western Canada and put to auction twice after arriving in Ontario, I had to slowly gain her trust as she didn't want to be touched by strangers at all. I started with feeding her ration balancer from a feed tub wile I was sitting on the ground as pictured above and progressed from there. I have made 3 videos with explanation of this process, see below: